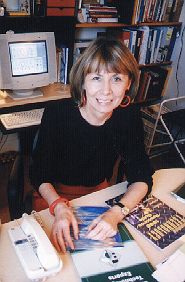 Alicja Mann was born and educated in Poland from where she emigrated to the United States in 1972. She made her home on Cape Cod, Massachusetts and worked for several years as a scientist, translator and mother.

After becoming more comfortable in her new country and language, she left science in 1985 to pursue her writing. Many of her feature stories and profiles of personalities were published in Cape Cod Life magazine and in the Cape Cod Times as well. She has also contributed to the New Leader and In These Times.

In 1989 Alicja Mann established Word StudioSM bringing under one umbrella her writing, advertising, and publishing services.

A professional profile of Alicja Mann appeared in the Cape Cod Journal on February 22, 1999.